BTS’s Jimin Talks About Collaborating With His Idol Taeyang, Relying On His Members, And More

BTS’s Jimin is on the cover of W Korea!

In addition to being W Korea’s latest solo cover star, Jimin was recently announced as a global ambassador for Dior. The interviewer congratulated Jimin on this honor and the artist shared, “I’m so thankful to have become an ambassador for global brand Dior and I think it’s very meaningful.” On attending fashion week this month, Jimin shyly commented, “I’ve never been to fashion week before so I’m worried that I’ll be really nervous.”

While reflecting on the success he had in 2022 as both a solo artist and member of BTS, Jimin spoke about learning how to be present and focus on how he was feeling in the moment. Expanding on that, Jimin was asked what little things bring him happiness. As the interviewer mentioned how picking BTS’s fans ARMY was an expected answer, Jimin replied with a laugh, “You could think it’s a given for me to say ARMY, but I really can’t forget the fans. Because from a long time ago, whether I was happy or sad, my joys and sorrows have been with our fans. For simple pleasures, spending time with my friends is my only hobby and leisure activity.” 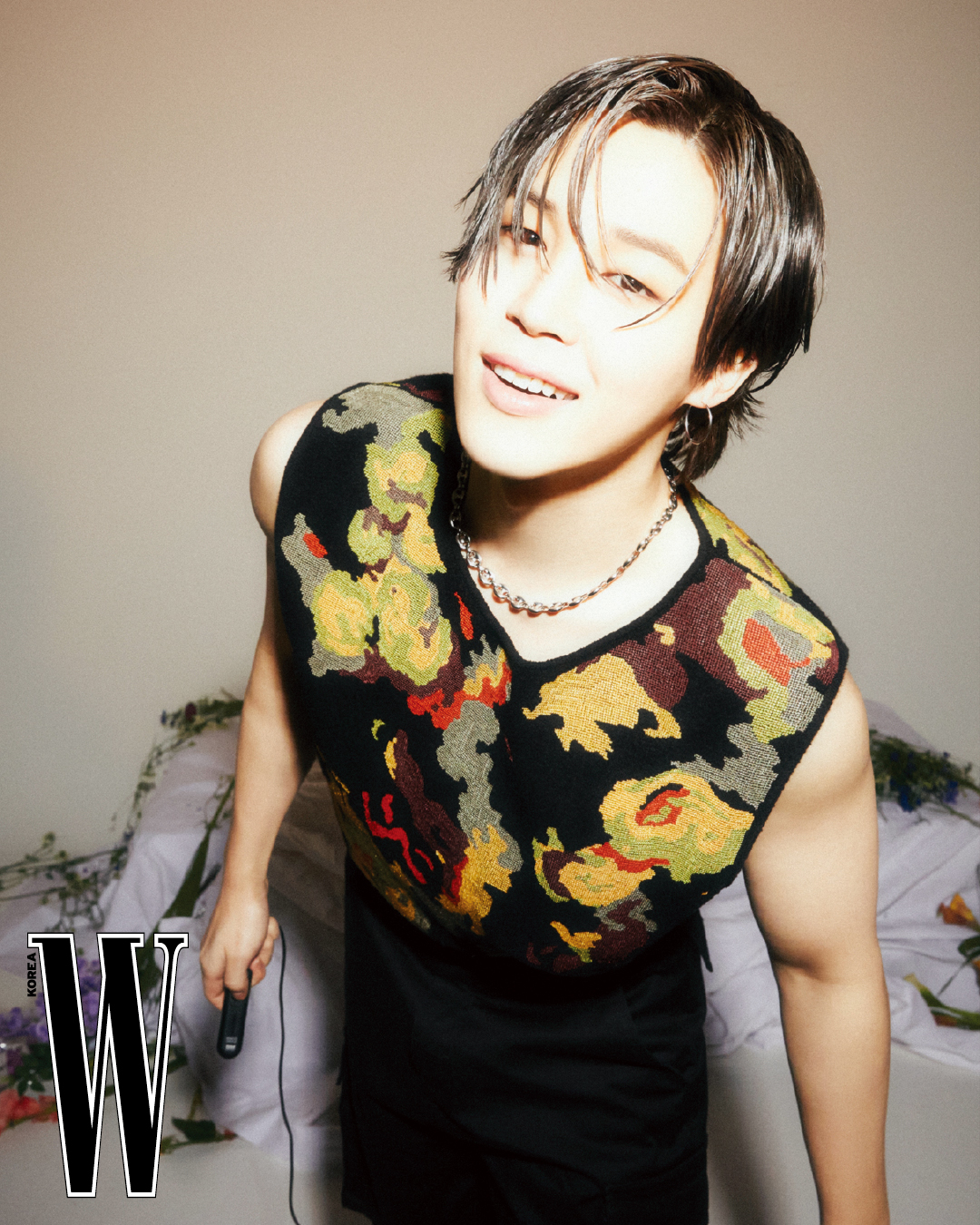 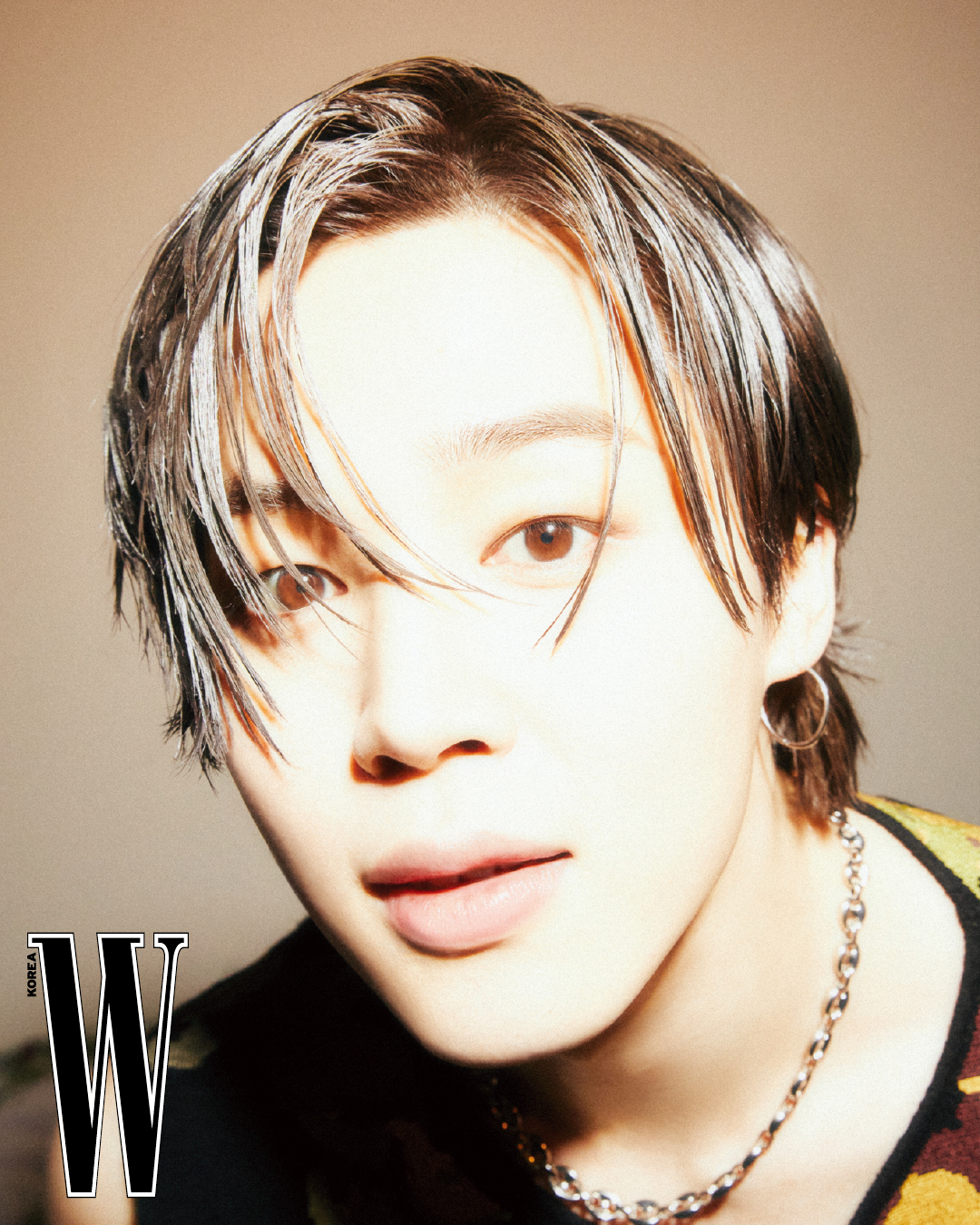 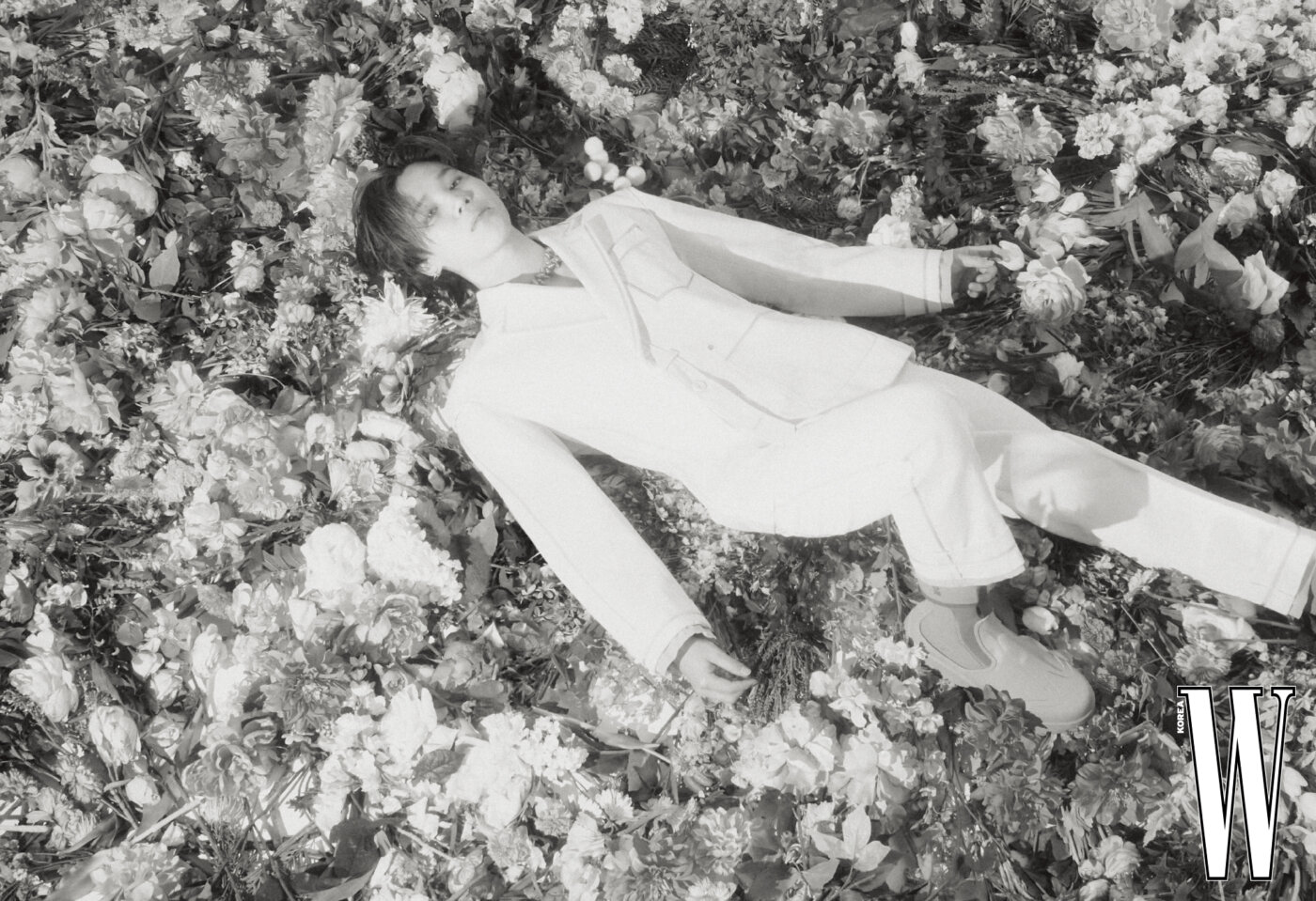 Earlier this month, Jimin featured on BIGBANG’s Taeyang’s new track “VIBE” and the iconic collab has already swept iTunes charts around the globe and snagged a music show win. Jimin excitedly commented, “Taeyang is like my idol. To the point where it wouldn’t be an exaggeration to say that I’ve come this far with the goal of one day working on music with him. When I was younger, I felt and learned a lot while watching his promotions.”

He added, “When he reached out to me to work on a song together, it felt like a lie. While working by his side with this opportunity, I learned that [Taeyang] was an even cooler and better person than I had thought. I was also touched by how meticulously he took care of each and every thing all throughout the production process. It got me thinking again, ‘I want to become a singer who is really good at singing and does really well on stage.”

Branching off a past interview by BTS’s J-Hope who spoke about organizing his thoughts by listening to his past mixtapes, Jimin was asked about his own processes when working on music. Laughing, Jimin explained, “To be honest, it’s became difficult for me to approach music production. Although I knew how fun and charming this work was, writing lyrics that everyone relates to and feels touched by is not easy. My members looked so amazing all over again [for being lyricists]. To me, I think I simultaneously have the desire of ‘I want to accomplish this’ and the fear of ‘Will I be able to do this?'”

Elaborating on his younger days, Jimin shared the story of how he began dancing. “I vividly remember my first meeting with dance,” Jimin shared. “In middle school, I was chatting with my friends by the desk in front of the teacher’s desk. On the teacher’s desk was a notice for parents about after school activities. Among them was break dance.” Jimin concluded while laughing, “My friends and I said ‘if we learn this, we could gain a ton of popularity,’ so we all started together.” 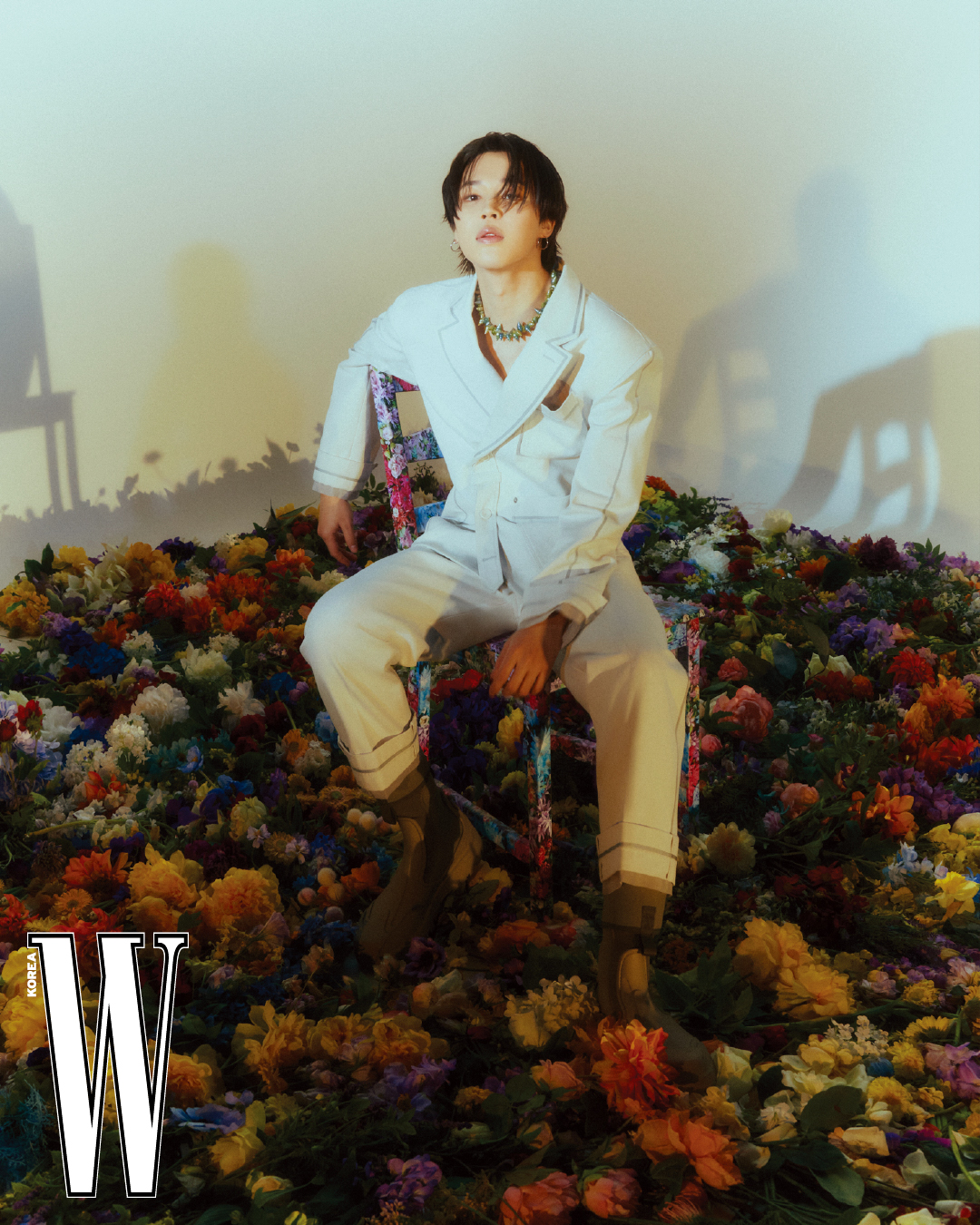 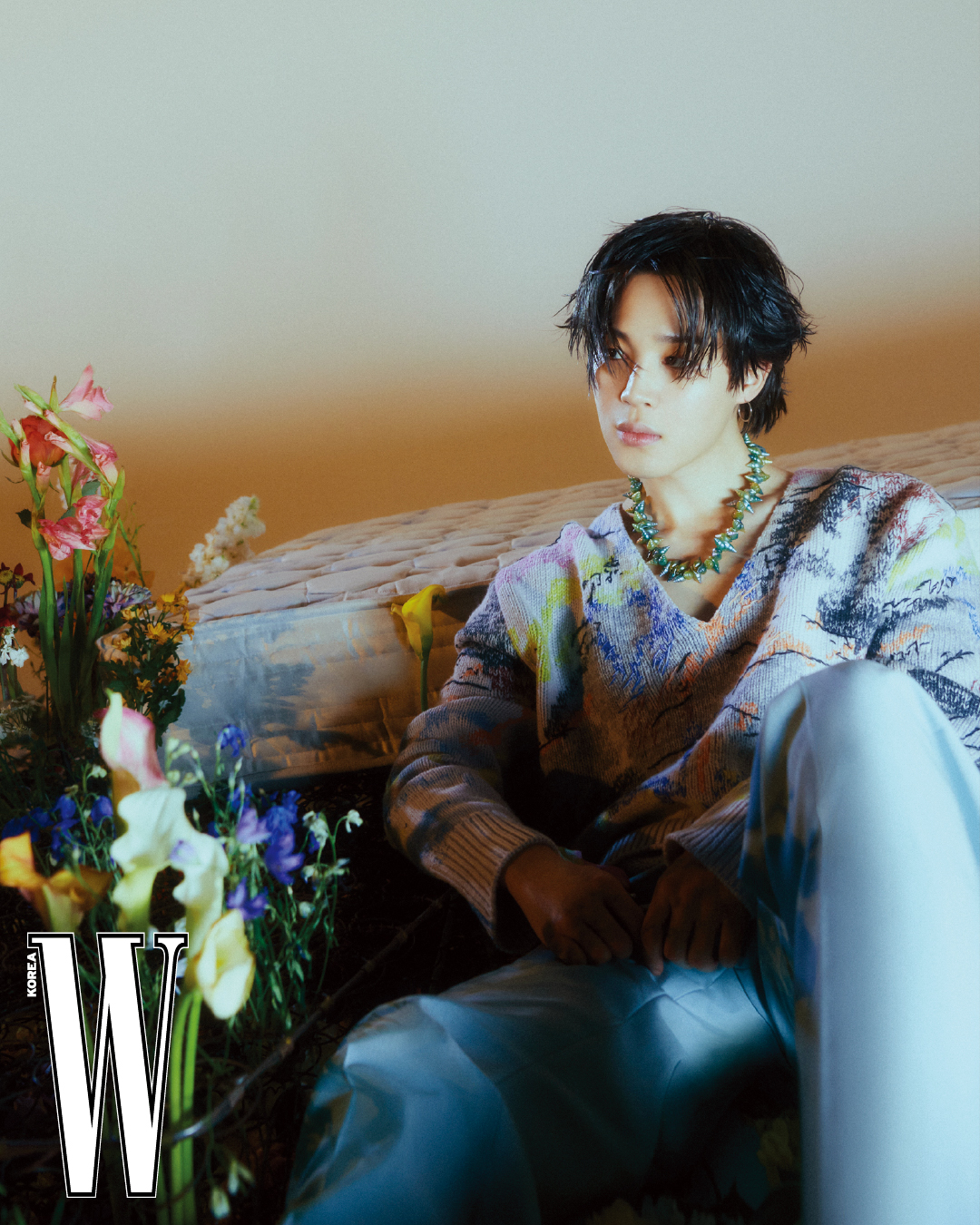 When asked what one thing from 2022 he wants to praise himself for, Jimin responded, “There was a time I sought out my members saying ‘I think I’ve been wandering around [in life] a lot.’ My members comforted me a lot and gave me tons of strength so I could start preparing my solo album. I want to praise myself for seeking out my members and saying something as soon as I felt I was having a hard time.”

On what he needs most in his life right now, Jimin chose time. He elaborated, “I need time to organize my twenties, accept my thirties, and seek out my life’s direction after that. Also, I need time to finish working on my album, time to enjoy hanging out with my friends, etc…I just wish I had more time.”

As he had mentioned his thirties, Jimin also looked further into the future and described what version of himself he anticipates. “I want to become a laidback person. If I want to become more laidback in work-related aspects like music or performances, I have to become someone who’s good at that. To have peace of mind, my heart and surroundings have to be that much stronger. I want to become a person who can keep their word to become that way.” 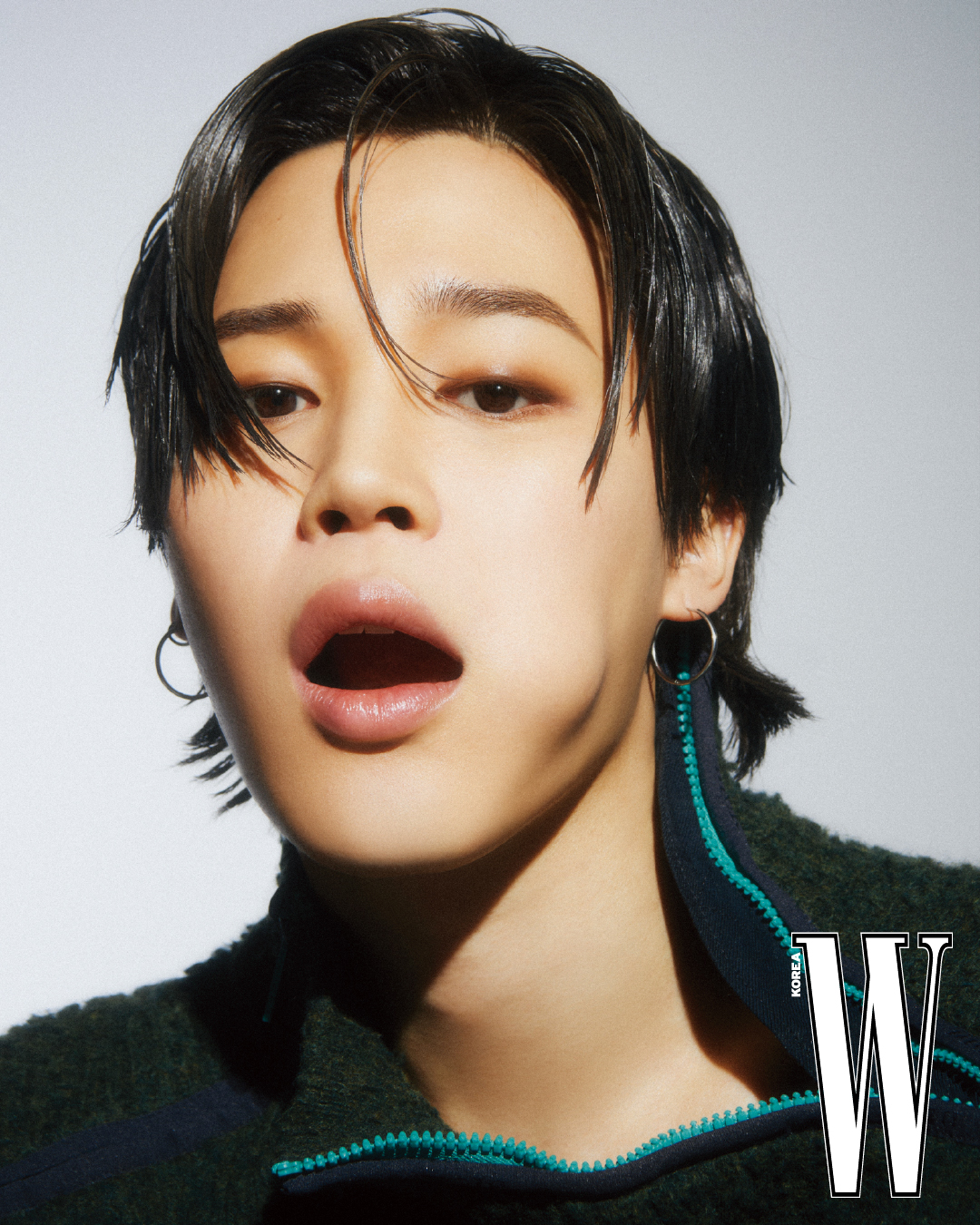 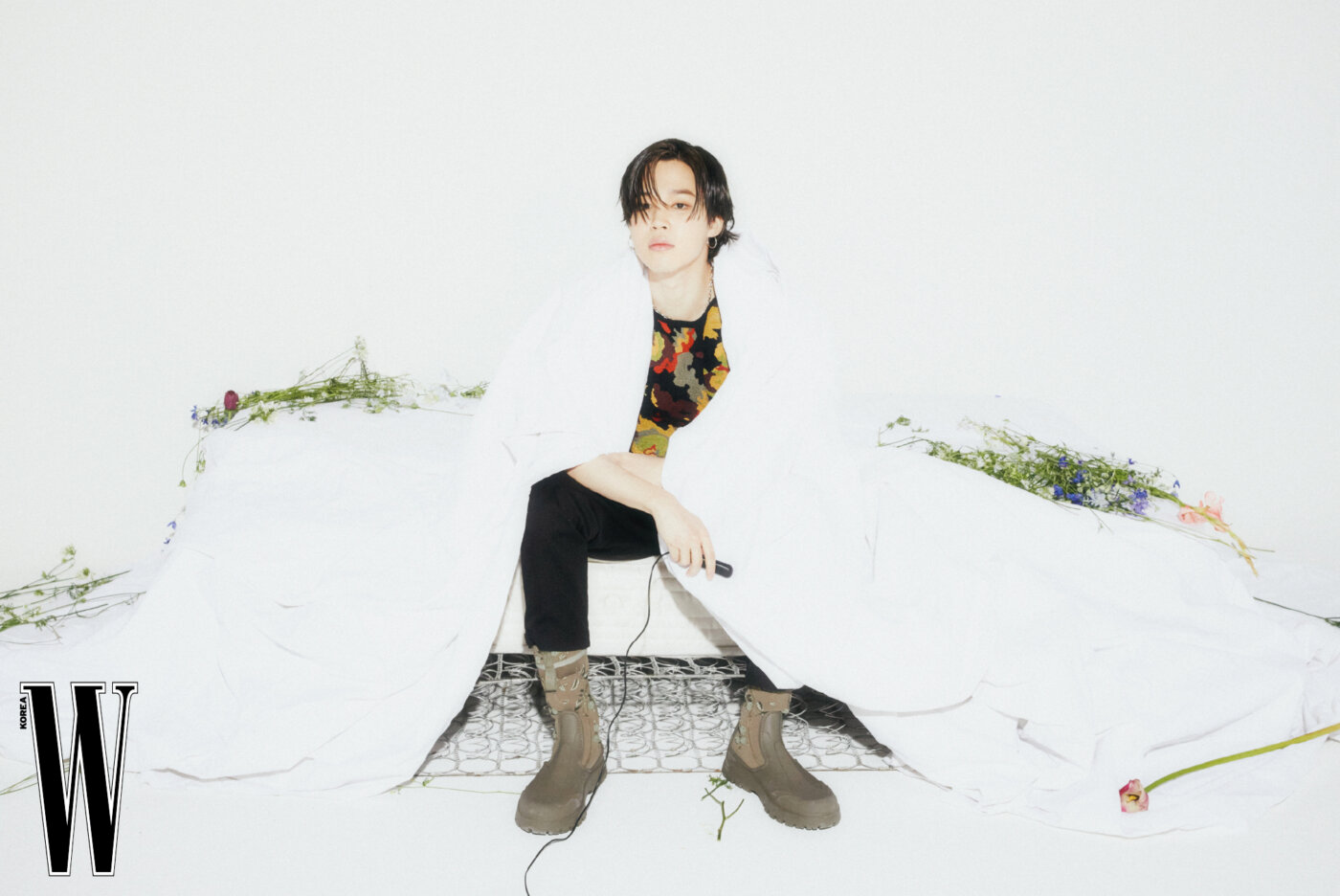 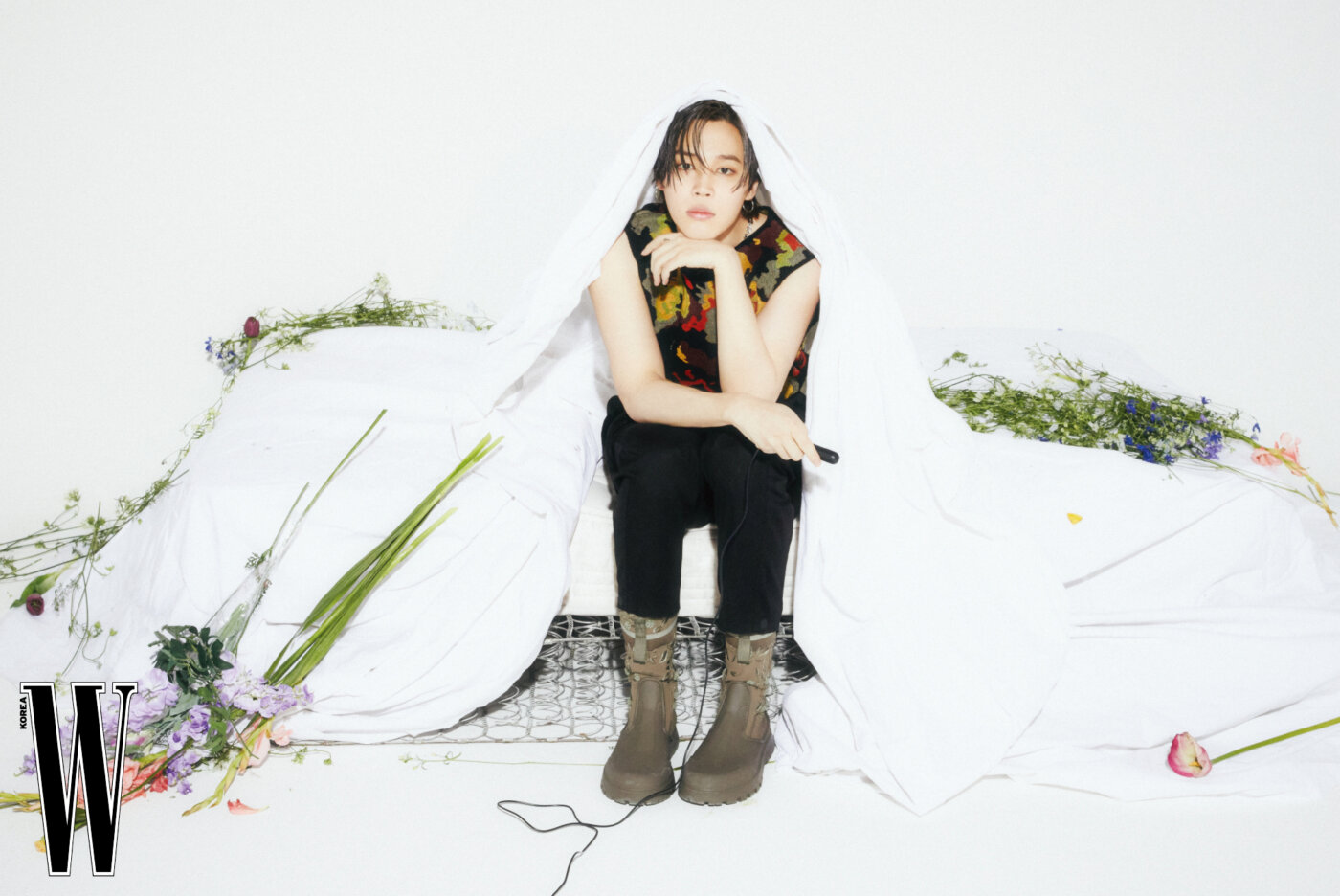 Jimin has recently been reported to be releasing his first solo album next month, with his agency BIGHIT MUSIC sharing that the album’s release schedule will be shared once finalized.