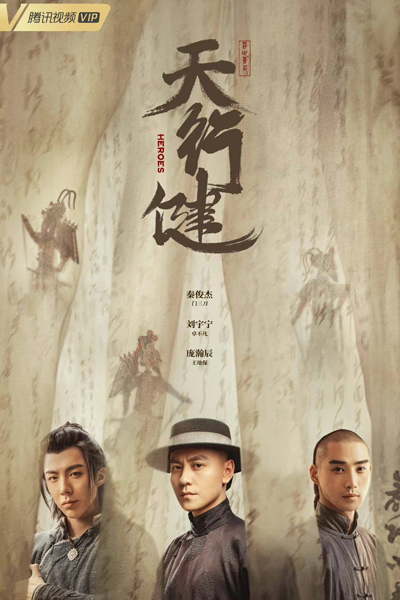 Men San Dao, the great master of the Inner Household, as well as the imperial bodyguard of the Guangxu Emperor, was imprisoned for participating in the Hundred Days Restoration, after serving 12 years, he was released by the boss of the Xuantong Internal Affairs Office who asked him to solve a case in exchange for commutation of his sentence. He agreed and when investigating found a man that was to be arrested was the remnant of the same faction he was a part of.

Zhou Bu Fan was a Jianghu swordsman and a master of high skill. He was intelligent, but unfortunately he was very poor, so poor that he had to rent out the main altar of the Gate Sect and wander around with his disciples. Running out of options, he made a deal and secretly helped Wang Ye do something disgraceful, making himself a pawn that could be used and discarded at any time. Jianghu had changed, no one cared for his cause, and he just couldn't adapt to the modernization.

Zhu Yan was a small town Confucian student. She waited 10 years to take an important exam and get the meritorious name but the law changed, the examination was abolished, and all of her efforts were in vain. In order to make a living she opened a shop in her town. She hated the law of change and hated all the people and things that undermined the imperial power, wanting to do something about it. She became involved in a case, chased the murderer for thousands of miles, only to find that he was protecting the interests of the revolutionaries.

In 1919, three unrelated people who were stuck in a turbulent world met each other and came together with others coming from similar hardships and defended the imperial power, who longed for a constitution, and to block the opposition once and for all.

Would they succeed, would their ultimate goals be realized, and would they be the heroes of their generation?